Some of you experience graphical issues on specific maps, so i hope this makes clearity for you and you get it solved.

So basically the main reason for losing textures in maps is that some maps uses same shader links in .bsp file (map code) but not same shader strings in shader script file...
Two examples which you know is overkill and rqdm5.

Let us look into the bsp files of overkill and reqdm5, also the shader file of reqdm5 to get a better understanding of this issue. 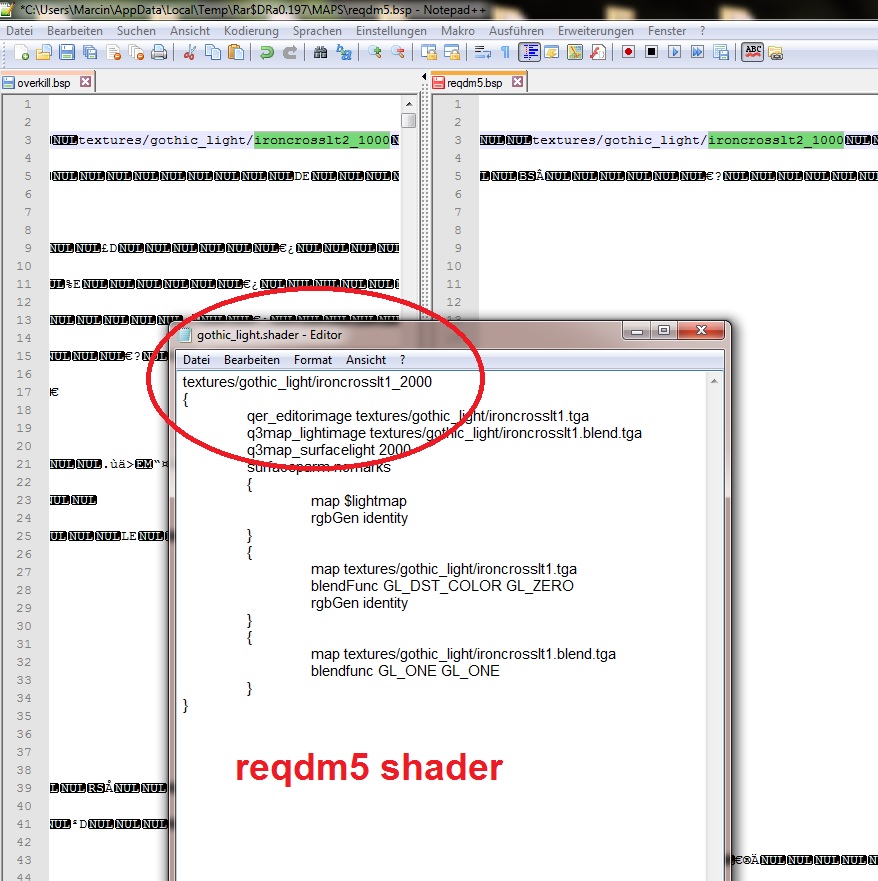 So on this picture here, you can see on the left site the overkill .bsp and on the right site the reqdm5 .bsp
The green marked shader links in both bsp files are identical and untill then everything is ok.
But now pay attention to the shader file of reqdm5 (middle of picture) unfortunately the map creator made a misstake and wrote the string "textures/gothic_light/ironcrosslt1_2000" instead of "ironcrosslt2_1000" so the shader link in .bsp file doesnt match the shader script, the map actualy cant find the texture file.

The next importand thing which we have to know is, quake III engine overloads always the previous pk3 files with the latest pk3 file which has the same name or same strings inside the pk3 file.
Thats why overkill runs with reqdm5 broken shader, result is a missing light texture on both maps.
Easiest and fastest way to fix is to rename "reqdm5" to "0reqdm5" or "Areqdm5", so OS pushes it up and quake will load overkill after reqdm5 and the right shader file.


Now sometimes we can experience a bit harder to solve issues like this example here (Thx Micky for sending). 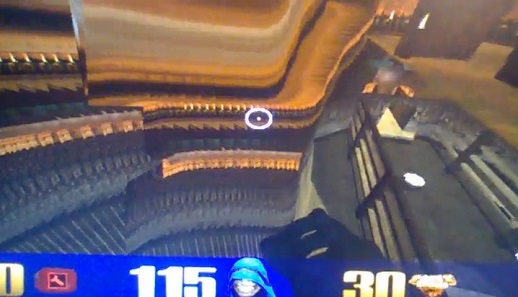 The problem here is not missing textures but more funny stairs effects, which mostly affects skies, teleports or floors.
Unfortunately when quake isnt missing anything it wont also show anything in the console.
The only and hard way to locate the issue causing file is to move all pk3 files to a second folder and put small pieces of pk3 files back to baseq and test. This takes much time.
The easiest, fastest way and just like efficiently as the hard way is to clean your baseq folder and place only pk3 files in you need.
Dont listen to people who say, its nonsens to have a clean baseq folder...
Actually with more files you have, more likely an issue can happen.
Its neither cool or useful to have that amount of pk3 files...


So if you are that lucky person who has this graphical issue follow these steps. 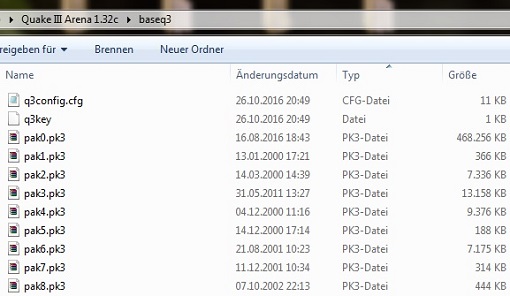 2. Download maps which you actualy play, these from maplist which we play on V server and if you play somewhere else too, these which they play, nothing more!!!!


3. If you are lazy ass, i prepared a clan v mappack with all importand maps, just donwload it and the osp mappack from below and you will have everything you need, this should look like that. 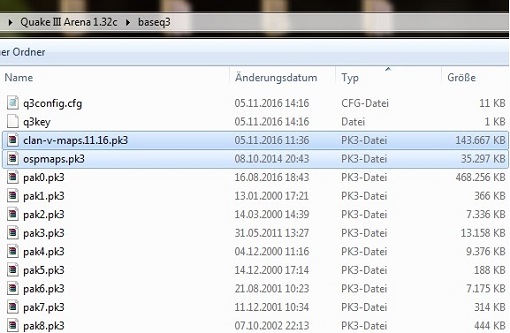 
Sorry for the long post, here´s a V potato. 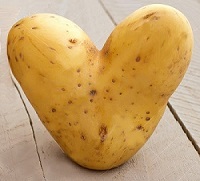 Who the fuck is "General Failure" and what is he doing on my PC...

I love you attention to detail Flakowakownowski.

As for map packs im more lazier, so tx for the download love.
Top

Hehe Flinski, that was anyway more a joke than anything, im glad i can help

Who the fuck is "General Failure" and what is he doing on my PC...

my lighting gun beam has no texture here.

Cleaning baseq folder would help here as well. Then you still can put small amount of pk3 files back and test if the beam is still OK.
Who the fuck is "General Failure" and what is he doing on my PC...

Return to “The Players Lounge”